Join 962 other followers
Follow The Shabby Suitcase on WordPress.com

For the long Memorial Day weekend, my husband and I drove up to Niagara Falls from Stamford, CT through upstate New York. This part of the country had always been a black hole to me as I considered it the tundra of the US, territory I hadn’t planned to charter in the past! While it may still be the tundra (by my southern standards) during the winter, it proved quite impressive in late spring! The rolling Catskill Mountains with farm houses scattered throughout the land made the 7 hour drive to Niagara a bit more enjoyable.

We stopped in Syracuse, NY for dinner at Pastabilities at Guy Fieri’s recommendation from Diners, Drive-Ins and Dives. Unfortunately, we weren’t all that impressed and felt the publicity from the TV show had overwhelmed this restaurant and couldn’t quite keep up with the hype. You can read a more detailed review here.

Onward to Niagara Falls, we stayed at a B&B on the Canadian side called Ambiance by the Falls, hosted by an affable Canadian, Scott.  Ambiance by the Falls is located just off the beaten path but an easy and rather scenic walk to the falls located just past the Rainbow Bridge. Rooms were nice and clean, breakfast ample, and for those brave enough to venture to Niagara during winter to see the frozen icicles on the Falls, this B&B is open year around!  We would recommend this B&B to those who wish to stay near the falls and who don’t want to be in the middle of the bustle that Clifton Hill brings.

Ambiance by the Falls

Speaking of Clifton Hill…  I would describe this part of town as a Las Vegas for tweens. It is very carnival-like with dozens of haunted houses, a Ripley’s Believe It or Not, a Guinness Book of World Records museum and heaps of places with arcade games. I couldn’t possibly recommend staying at one of the hotel chains in this area, even with a view, as the clutter of this part of town is really disenchanting and distracts from any view of the falls that you may have. This is just my opinion!

The main Falls in Niagara are the American Falls and the Horseshoe Falls located in close proximity. Both are easily viewable from the walkway along Niagara Parkway.  Viewing from the American side of the Falls, you will be able to get up close and personal to the falls, feeling the full effects of the water splashing off the rocks. The American side also offers a platform that tourists can walk across for a more outward-looking-in view of both falls. The Canadian side offers, in my opinion, the best views of both falls. Whether you stay on the American side or the Canadian side, there is a pedestrian walkway to and from both sides on the Rainbow Bridge. Just bring your passports as you’ll be required to go through customs.

Other attractions offered by Niagara Falls include taking a boat down into the falls where you will be provided a poncho and undoubtedly be soaked regardless. The boat ride is a historic attraction in Niagara which was once owned and operated by Maid of the Mist.  In 2014, that contract was transferred to Hornblower and rides are offered every 30 minutes and last about 20 minutes… the mist is so strong once you’re in the falls that it’s hard to see much of anything so 20 minutes will suffice for most. They also offer a night tour to see the falls lit up at night.

For another view, check out the Journey Behind the Falls attraction that allows you to view Horseshoe falls from the side and behind a glass where you can feel the strength of the Falls. If you opt to do many of the attractions including the hop-on-hop-off bus, consider getting the Adventure Pass online or at any of the attractions.

There are also hiking trails around the river and down into the basin to see the rapids, called the White Water Walk.  Dafferin Island Park is situated behind Horseshoe Falls and is more of a hot spot for locals. It consists of 10 acres accessible by foot paths and is free to the public.

If we came back to Niagara Falls, we would opt for a B&B in Niagara-on-the-Lake, a short drive north of the Falls.  This quaint town is busting with vineyards and a really cute Queen Street popular for shopping, ice-cream indulging, and wine sampling. There are many B&Bs in the area and is a bit more quiet compared to the Niagara Falls tourist hot spot. 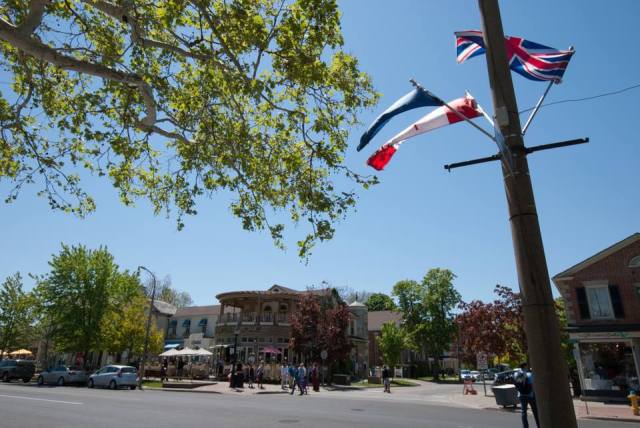 We found a nice lunch spot, The Epicurean, which doubled as a coffee shop with an assortment of gourmet sandwiches, soups and salads and a small winery where local wines are served. They also have a sizable patio in the back for al fresco dining which we took full advantage of.

We also stopped by the (self-proclaimed) best ice-cream in Canada, Cows, ice cream Shoppe.  Cow’s ice cream contains 16% butterfat and all of their treats boast quality ingredients, like imported Madagascar vanilla, Dutch cocoa and PEI strawberries. Wowie Cowie and Gooey Mooey are considered a couple of their most famous flavors. The Gooey Mooey consisting of burnt sugar ice cream, English toffee, caramel cups, and chocolate flakes did not disappoint!

A blog post on Niagara Falls isn’t complete without a few facts on Canadian wine. The Ontario region produces more than 75% of all Canadian wine. The moderate climate of the Great Lakes allows for several grape varieties to be harvested in this region. Specifically, the Niagara Peninsula is Canada’s most important wine region, with 13,500 acres of Ontario’s total 16,000 acres of vineyards.  This region is the crux of Canadian wine! Lake Ontario’s offshore breezes are kept circulating by the Niagara Escarpment (responsible for the Falls), which helps minimize frost damage and fungal disease. But to the good stuff… this region is most well-known for its Icewine. No,  not frozen wine! Icewine is made from a grape (typically Vidal Blanc, Riesling or Cabernet Franc) that actually freezes in winter before the fermentation process. It is then typically harvested between December and February. The grapes are then pressed while frozen leaving much of the water/ice behind and saving much of the natural sugars. The result? A sweet dessert wine! You can read more about Icewine here.  With the changing climate to increasingly warm and long summers, the quality of dry table wines have increased leaving Riesling more desirable.  We did make it out of Canada with a couple bottles of Riesling that we tasted and enjoyed!

For dinner options, we spent one night at AG which is a locally inspired restaurant. We love our farm-to-fork restaurants!  Our food was fresh, tasty and cooked to perfection! You can read my more detailed review here.

Another dinner led us to Napoli Restaurante, a local hole-in-the-wall Italian restaurant operating for more than 50 years by an Italian family. The food was fresh and they make their own pasta in-house! This appeared to be a local dive and other diners near our table were Italian frequenters.  I considered this a great find. You can read my more detailed review here.

After our thirst for the Falls were quenched, we decided to make the 1.5 hour drive to Toronto for the day. Our plans included going up the CN tower, snagging lunch at one of the many trendy restaurants, and checking out the city. Our plans were completely foiled when we saw that there was a Toronto Blue Jay’s game playing that afternoon just across from a brewery that was tailgating before the game.  We quickly snapped a few pics of the CN tower and headed over to the Steam Whistle Brewery where there were free tastings, tours, live music, corn-hole, and a larger than life connect four game being played.  We snagged a burger, a pint and chatted up a few locals prior to heading over Rogers Centre where CAD$15 dollar tickets later, we were checking off another MLB stadium from the list! 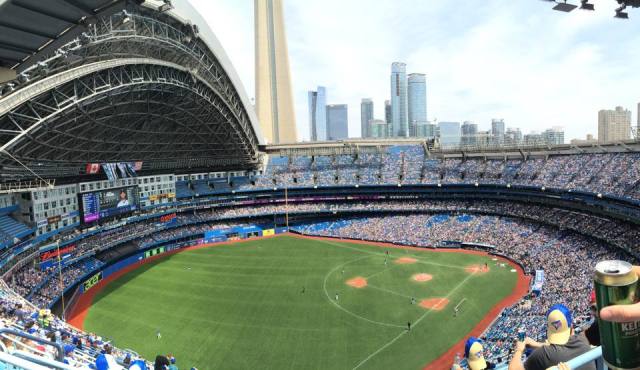 Toronto impressed us. It’s young, hip, clean and bustling with people and restaurants. We found most skyscrapers were residential housing versus commercial property. That coupled with Rogers Centre located downtown made Toronto a pretty cool city that we wish we could have explored further!

As our weekend wrapped up, we set our sights on Cooperstown, NY as a detour on our way back to Stamford.   I underestimated what Cooperstown had to offer. Not only is this town the home of the Baseball Hall of Fame, but it is also a cute baseball-themed town resembling early American town-squares. Each storefront is decorated in baseball themed décor with names such as “Mikey’s Place,”  “Batters Up” and “Extra Innings.”  We stopped for lunch (and a milkshake) at Stagecoach Coffee just across from the Baseball Hall of Fame.  Our hunger pangs were satisfied and we were happy to sit on the patio to enjoy the stellar weather. 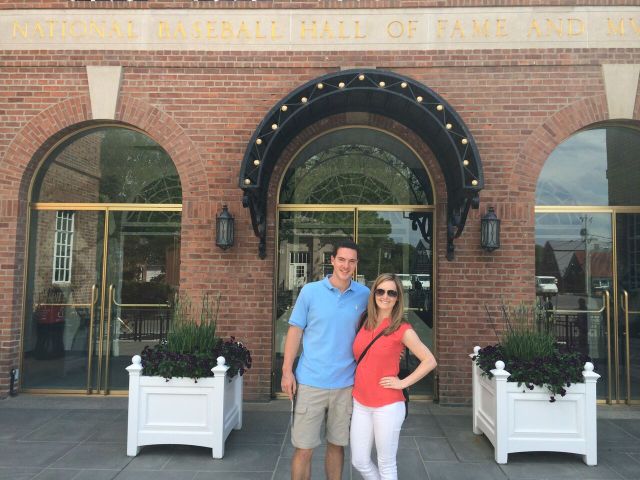 The Baseball Hall of Fame was my husband’s desire; however, even a baseball novice, such as I, can enjoy this Hall of Fame museum. There are plenty of interesting memorabilia and stories displayed. I particularly enjoyed the homage to women in baseball first introduced to me in the movie, A League of their Own. There’s even an original Rockford Peach and Racine uniform on display.  One of my favorite facts was that a woman named Sohpie Kurys owns the record for successful base steals at a 99% success rate in the All-American Girls Baseball League (AAGBL).  It’s difficult to compare the men and women leagues as women’s bases were closer together; however, the men’s record went to Lou Brock at that time who had a success rate in the mid-70% range. He wore padding guards under his pant jersey, while Sophie Kurys wore a skirt with bare legs.  Kurys stole a league record 1,114 bases in the eight seasons she played for the AAGBL.  Only Rickey Henderson, who has stolen 1279 bases in 20 seasons of play, has a higher career total.  She was featured as “Betty” in A League of their Own and actually played for Racine in the AAGBL.

Just down the street you can freely walk into the stands of the Doubleday Field where the infamous Hall of Fame game is played. Pretty cool!

Another successful road trip in the books!