Most Americans know, but others are surprised to learn, that Puerto Rico is a United States territory located in the Caribbean, just south of Cuba. It’s comprised of the main island of Puerto Rico and a couple of smaller islands. Puerto Ricans are natural born US citizens; however, did you know that Puerto Ricans are prohibited from voting for the United States president, or U.S. Congress, which has full jurisdiction over the island? Currently, the political make up suggests that about half of Puerto Ricans wish for the territory to become a state, others wish for independence.  And we, main landers, thought we had political problems!

Political issues aside, most anyone can agree that Puerto Rico is simply, beautiful! I had the opportunity to spend about 10 days in Puerto Rico on business where we spent half of our time in the northwest corner of the island in a town called Aguadilla. The latter half was spent in San Juan, the capital of Puerto Rico.

To get your bearings…

Aguadilla is about a 2 hour drive west of San Juan and is believed to be where Christopher Columbus landed in 1493. It has about 19 beaches and is best known for surfing. There is still an active US Coast Guard base in Aguadilla but aside from some surfers, you won’t find many tourists in this town. In fact, there’s only one hotel in Aguadilla. Home sweet home for the week!

During our lunch break one day, we did get the opportunity for our hosts to show us Crash Boat Beach…even in work clothes, we appreciated this field trip as the beach was stunning. The beach received its name from being the former site of the military port used to rescue downed air crews from Ramey Air Force Base.  The water was unbelievably blue and clear that it was all we could do to restrain ourselves from jumping in! 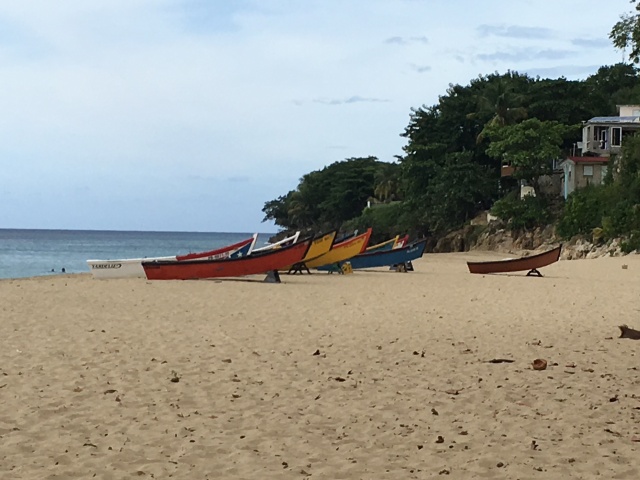 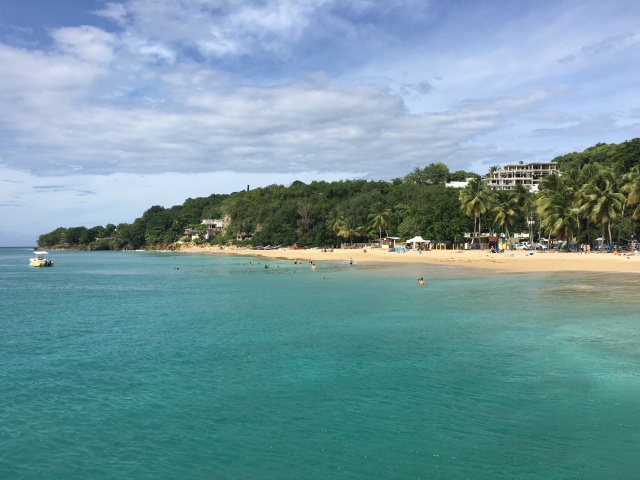 Because Puerto Ricans are known for their friendly nature, our hosts took care of us by showing us some of their favorite restaurants in the area. The food was delicious! We found the food to be hearty, comprised of stewed meats dripping in sauces with sides of rice/beans, plantains fried to perfection, or most unique to Puerto Rico… Mofongo!

Mofongo is traditionally made up of garlic, oil, and fried green plantains mashed up into a thick consistency which typically holds the meat of the entree. Mofongo can come in various forms using different vegetables and you will likely see Trifongo on a menu which uses yuca, yellow and green plantains.

So where did our Puerto Rican hosts take us?

Cinco is a new (as of the end of 2015) modern restaurant with a new spin on Puerto Rican food. We had lunch twice at Cinco and I had hoped to visit for dinner. This looks to be the kind of place to enjoy a happy hour drink and dinner.

Desecheo is owned by the same owner as Cinco. We had a very similar experience at a new location. I had the mofongo at Desecheo and enjoyed it.

Zazones was a bit of a more upscale restaurant for Puerto Rico and falls into the creole food category. I had the Sea Garden Pasta which I thought tasted a bit bland. However, my colleagues thoroughly enjoyed their lamb chops.

One Ten Thai is located in a big hut with a large outdoor patio. I love Thai food so I have a bit of a high standard. My red curry was good but not as rich in flavor as I expect curry meals to be. I did enjoy the patio and coupled with the humidity, if I closed my eyes, it almost felt like I was in Thailand.

On to San Juan! Some of my colleagues took the opportunity to stop by the town of Barceloneta to visit the outlet malls. I couldn’t be bothered with shopping…I had San Juan to explore and was fortunate enough to have a dear friend of mine fly in for the weekend for a quick jaunt through the city!

Old San Juan has such a different look to it than the rest of San Juan or Puerto Rico for that matter. My friend and I had actually visted Lisbon a few years prior and we couldn’t help but notice the resemblance…think…Bairro Alto! We were pleased we opted for a taxi that evening as opposed to driving as the streets are narrow and often steep. 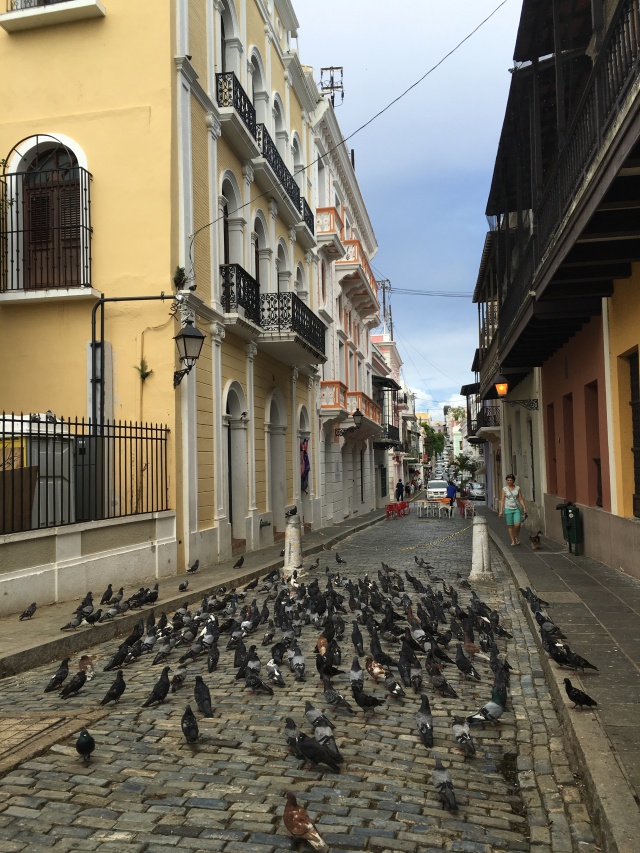 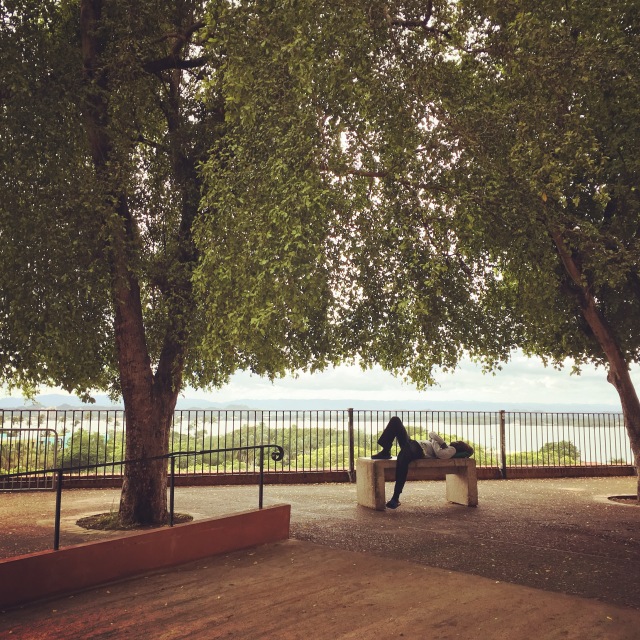 I stayed at the Hilton in Condado. Condado is a nice area with lots of restaurants and shops; however it is pretty touristy and the sidewalks are filled with pedestrians walking to and fro. On a personal trip, I may have opted for a Bed & Breakfast in Old San Juan. However, the views from my hotel room at the Hilton were unrivaled. I was on the ocean side and I’m certain that if there were a hurricane to come through, I would have been the first swept out to sea. The sea breaks near the base of the hotel so it feels as though you could jump into the ocean (not recommended). There is certainly value in having that kind of  view! 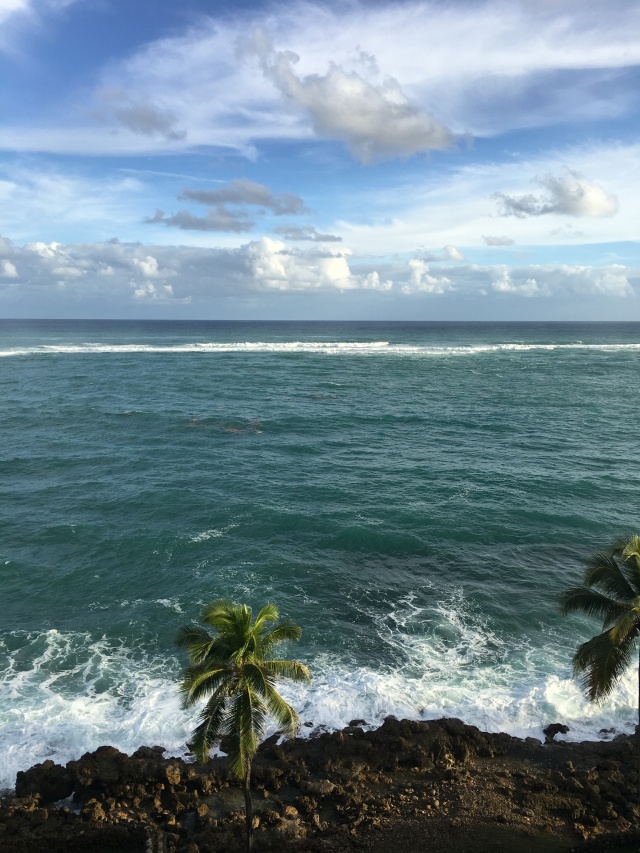 view from my room at the Hilton in Condado

Friday night landed us at The Mezzanine at St. Germain in Old San Juan. We procured a window/patio seat and enjoyed the 75 degree evening. The restaurant/bar was beautiful and we enjoyed tapas style plates and refreshing cocktails. There appeared to be a dual bachelor/bachelorette party in attendance which brought all kinds of interesting people-watching.

Saturday we leisurely woke up and joined a food tasting tour. If there’s one thing I have learned in my travel, it is that I really enjoy cooking classes and food tours so this is one thing I had to do…and without regret! Our tour guides were young local college students who spoke great English. They not only fed our bellies with some delectable tastes but also gave us some good information on the local culture, architecture, and history. I would highly recommend the 3-hour tour by Favors of San Juan Food & Culture Tours.  Bonus: we got to make our own mofongo! 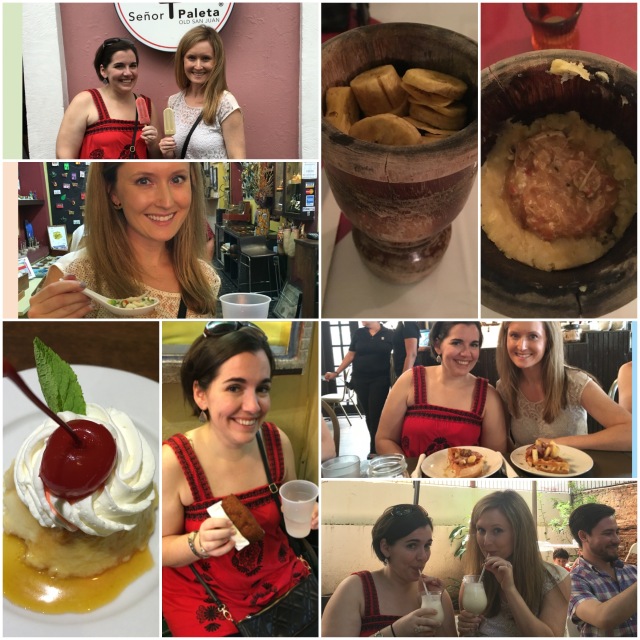 During our food tour, I met a fun couple from NYC who write a travel and food blog. They seemed like my kind of travelers so I thought I would share here.

We decided to spend our afternoon exploring Old San Juan. We spent a little time window shopping on a few of the main shopping streets and then hopped on the local (free) trolly that took us up to Castillo San Felipe del Morro where we walked around the 16th century citadel built by the Spanish. It offers great views of the city and Puerto Rico’s beautiful sunset. There is a small $5 fee to get in and tours are offered at an additional cost. 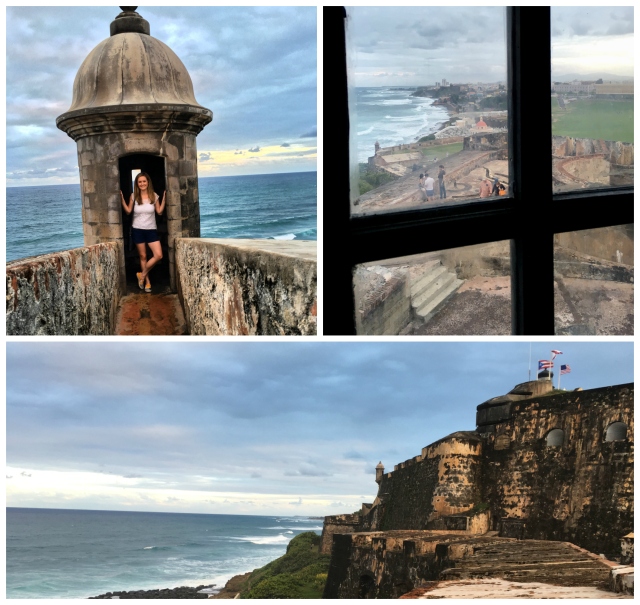 For dinner we walked down Avenida Ashford to the posh, Oceano Restaurant. We made reservations the day of and were able to get patio seating. The restaurant is located overlooking the beach and has an outdoor bar and seating area. The clientele was dressed up a bit more than at other restaurants in the area. Our entrees were mediocre with some odd pairings of seafood and vegetables. I would suggest this restaurant for a pre-dinner drink and appetizers for the view or perhaps lunch.

Sunday we woke up and were picked up at 7am for a snorkel and catamaran tour out to Icacos Island.  Our tour company picked us up at the hotel and drove us to Farjado, on the east side of the Island where we hopped aboard a catamaran. The catamaran going to Celubra was fully booked so Icacos was our destination. It worked out in our favor as the catamaran going to Celubra was packed solid with people. Our catamaran had a meer 15 people. It felt like we had the boat to ourselves with a few new friends.  It is definitely worth asking tour companies how many people are scheduled to depart to find out if you’ll be one of many scramming for the best seats on the boat. We used http://www.travelerpr.com/. The captain took us on a short boat ride to Icacos where we got to spend a bit of time exploring the island.  The waters were gorgeous. We were then served a picnic lunch on the boat and were shortly  off to another island where we could snorkel around a reef. Unfortunately, the visibility was rather low that day for snorkeling and fish were scarce. However, hovering in the blue waters and lounging on the catamaran proved to be the perfect way to spend our Sunday. 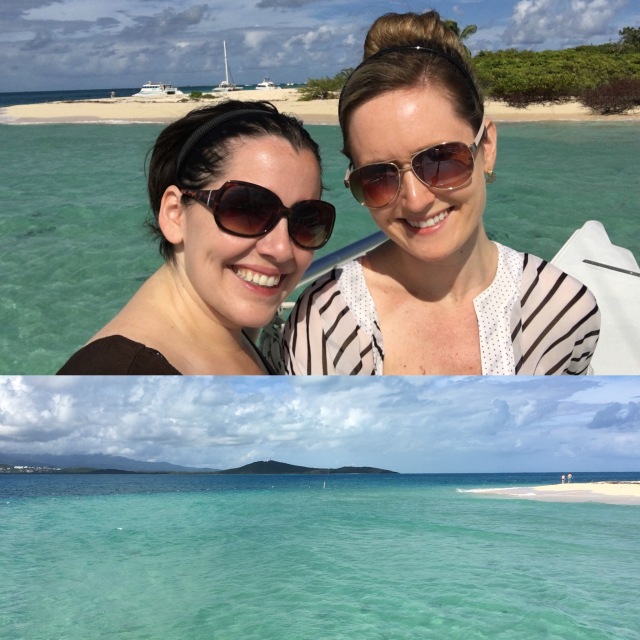 For dinner, we opted to eat at Yantar. The service was INCREDIBLE…. Because we were the ONLY two people in the restaurant… at 7pm… We found this very odd and wondered if we were steered wrongly by online reviews. My dinner was average but my friend enjoyed her salmon.  We did get the best seat in the house which lent itself to some great views of the bay. When we left, we noticed one other couple coming in…maybe we were just early to the party?!

During my stay in San Juan, I also enjoyed some deliciously fresh sushi at Nagoya Tiki off Avenida Ashford. Rolls were a bit on the high end for sushi but sumptuous and delicious!

Other Considerations for Puerto Rico:

El Yunque is the United State’s only rain forest. In fact, the whole island is very lush and mountainous.  There are plenty of outdoor activities, including zip lining, waterfall repelling, etc. that are available in the rainforest with plenty of companies ready to take you there.

Culebrita is a tiny island off the island of Culebra. It is only accessible by private boat from Culebra….which means it’s not likely to be as crowded as the isle of Culebra. Many credible publications (like this one and this one) consider Flemenco Beach high on the list with some of the most beautiful islands in the world. Isla Palomino also makes lists (like this one). Check out this list by the travel channel for some of Puerto Rico’s hidden beaches if you want to avoid the crowd (which has a shout out to Icacos and Culebrita), or Frommers comprehensive picks for the overall best beaches in Puerto Rico for families, singles, etc. here.

Bioluminescent Bay (aka Mosquito Bay) is a bay on the island of Vieques. Tiny microorganisms (like up to 720,000 single-celled bioluminescent dinoflagellates per gallon of water – yeah…) live in the water and put off a glow that reflects the light of the moon. Essentially, the water appears to glow when stirred around. Don’t worry, if you’re not staying in Vieques, you can still catch a night tour from Farjado (east side of the main land). There is also another bay in Fajardo called Laguna Grande and La Paraguera in Lajas that also experience the bioluminescence.

And now, I leave you wit this… 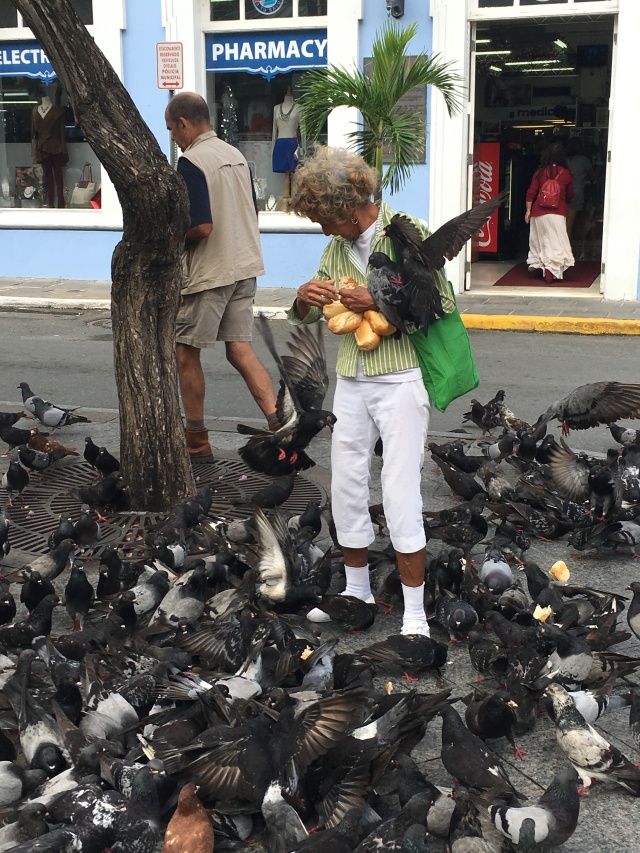