Ben and I’s jaunt to Denver was a whirlwind but true to our nature, we packed in as much as we possibly could and enjoyed every second of our stay.  Denver is a great, progressive, eclectic city full of culture but small enough to feel like you’re visiting a big town.  With Rocky Mountain National Park just 1.5 hours away, several breweries, popular sports teams, a respectable foodie scene and, (the elephant in the room) recreational marijuana, there’s a little something for everyone!

We visited Denver in September when the weather was absolutely PHENOM. Highs reached mid 80’s, lows in the upper 50’s, and the humidity teetered in the lower 30%.  It doesn’t get much better than that!

We stayed at the Curtis Hotel, a retro-chic doubletree by Hilton but with the feel of a boutique hotel.  Each floor is decorated in various themes.  We stayed on the Chick Flick floor where movie posters of Thelma & Louise, Pretty Woman, Jerry McGuire, and so many others, filled the halls.  Other themed floors include: Pedal to the Metal, TV Mania, and horror films (I did wonder if this floor would be a bit much for the little ones).  Further, you’ll find hyper themed corner rooms and suites decorated in spice girls, Kiss, Jimmy Buffett, Star Trek, Ghostbusters, Twister the game and so many more.  The remaining rooms are an extension to the retro-chic feel you get from the hotel lobby and The Corner Office hotel restaurant.  Overall we enjoyed the hotel and I found myself pushing extra floor buttons to peak at the décor.  My favorite was floor 6, where pac-man wallpaper decked the halls from floor to ceiling.

Our friends, Katie and George, whom we met during our time in Connecticut have since relocated to Denver and were kind enough to let us tag along on what turned out to be an awesome hike.  We drove 2 hours out to Estes Park, passing rural neighborhoods and the famously haunted Stanley Hotel (nope, didn’t care to stop and take a pic!).  Due to time not being a luxury, we did not attempt to bag one of Colorado’s 58 14ers; rather, we opted for the Emerald Lake hike which happens to make the Rocky Mountain Top 10 Hikes list.  We passed three gorgeous lakes as we entered up into the Tynbdall gorge.  The hike is about 3.5 miles round trip, with a reasonable incline (650 ft. gain) on the way out to Emerald Lake and with a rather easy downhill return.  Our friends suggested this hike was a great value for our time and we agreed! 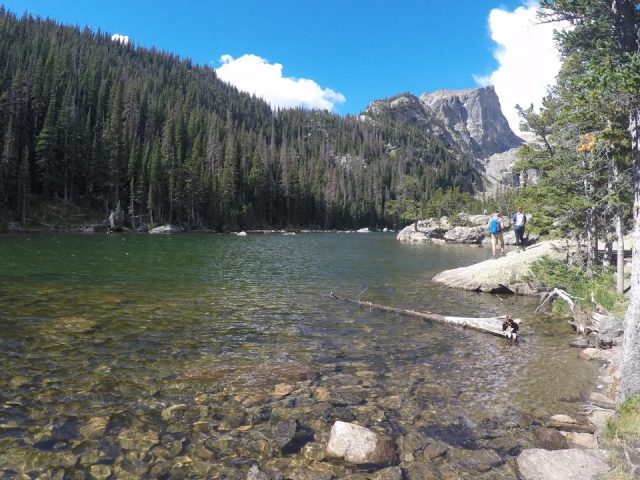 We also took a stroll (in the car) along Trail Ridge Road where we stopped off at the Alpine Visitor’s Center. The road is a pretty scenic 48 miles long.

Do views get much better than that?!

Denver is known as the mile-high city and while visiting the Capitol Building, you’ll see the thirteenth step is marked to designate where altitude reaches exactly 1 mile above sea level.  You’ll also notice a blue stripe of chairs on the upper deck of Coors Field where the Rockies play baseball signifying the mile high status.  One of Ben’s goals is to visit every ballpark in the United States in his lifetime so before we even booked flights, we had tickets to see the Rockies play the Arizona Diamondbacks.  While Ben and I did not sit in the mile-high chairs, we noticed that many sitting in the otherwise empty upper deck relocated to the blue chairs for the fun of it.

Denver has several local craft breweries, how else would Denverites stay warm in the winter?  We visited three during our quick trip: The Great Divide, Crooked Stave located inside The Source, and Jagged Mountain Brewery.  I won’t attempt to launch into my own opinions of each as everyone has their own beer tastes and as I like to say, “the best beer is the one you like.”  However, I will say that a trip to a brewery is a must for anyone who enjoys a good craft beer once in a while.  For a full list of Colorado craft breweries, go here.

For the curious judger, we did not partake in any new legal recreational activities.  However, I did find it fascinating to stumble upon the green crosses which are Colorado’s version of Amsterdam’s “coffee shop” green and white signs.  Signs that read “REC” indicated that product is sold for recreational use and signs on the window that read, “MED” sell for medical use only.  We passed by a few and also came across some “hits lead to hits” anti-smoking and driving campaigns.  I did find it interesting to learn that you cannot smoke cannabis in public, much like not being able to drink alcohol in public.

Cannabis is legally sold in Colorado

Ben and I each landed on a spot called Rioja during our independent searches of restaurants.  We were further sold on spending an evening at this restaurant once our friends indicated that it was their fave!  Chef Jennifer Jasinski won a James Beard Foundation award in 2013 for Best Chef in the Southwest and in 2016 she was named a semi-finalist for the James Beard Foundation Outstanding Chef award.  She was also a finalist on Bravo’s Top Chef Masters Season 5.  The accolades peaked our interest and the food didn’t disappoint.

After our splurge at Rioja, we opted for a more low-key dinner at Avanti Food and Beverage on Sunday night.  This place was so fun.  Their website describes it best:

We grabbed some delicious MiJo Japanese noodles and snagged a table and a glass of wine from the bar.  My Udon banana curry was delicious!  Once we got our bearings, we discovered the top floor of Avanti is scattered with picnic style tables, a large horseshoe bar, and stellar view of downtown Denver.  Avanti proved to be a great Friday night casual hang out full of young professionals.

view of downtown Denver as seen from Avanti

Scratch Deli & Bakery deserves a shout out.  This deli is located in Estes Park.  We grabbed one of their gigantic delicious sandwiches on our way out from hiking but these big guys would make a great mid-hike snack or lunch for anyone wanting to take a bite to-go.  Their chocolate chip cookies the size of a personal sized pizza was quite tempting!

Since we had early afternoon baseball tickets, we opted for brunch at Ignite, near Coors stadium.  The morning weather was fantastic and we sat on their rooftop (so many rooftop dining options in Denver!).  I had the green chile (a popular Denver ingredient) chicken on top of mac and cheese with a bottomless mimosa….  It was heaven.  I called it a cheat day and quickly got over it.

Saying goodbye to Denver was tough.  We loved this quirky little city and all it has to offer.  Our next visit will have to be during winter so that we can take advantage of all the nearby ski resorts.