Boston is one of the oldest cities in the United States, founded in 1630 by Puritans from England, and is the landscape for several key events in US history including the Boston Tea Party, the Boston Massacre, the Battle of Bunker Hill and the Siege of Boston.  This city rich in history attracts over 20 million visitors per year!  It’s no wonder that this city has one of the highest costs of living in the United States and is also high on the world livability rankings!

Boston is a 3 hour drive from our current home town of Stamford which makes a commute to Boston rather easy for a weekend getaway. We love it so much that we had to bring my parents to Boston to experience it for themselves and I’ve also had the benefit of visiting Boston for a business trip. From the various experiences, I’ve combined some helpful bits of information that made our visits easier and also enjoyable!

First let us get our bearings:

We quickly realized that Boston doesn’t come cheaply! Boston is home to many business type hotels which tend to be more affordable.  I have stayed at the Marriott Long Wharf for work and the Hyatt Regency Cambridge for a personal visit. The Marriott in Long Wharf is a great location near Faneuil Hall and just on a harbor. If you opt for this convenient and nice hotel, do request a room away from the lobby area. Upbeat music is played loudly in the lobby until about 9 pm that can be easily annoying in your private room.  The Hyatt Regency Cambridge is a great location in Cambridge and they even offer a free shuttle to Harvard Square and other popular Cambridge locations. They also will offer free upgrades if they are available so be sure to ask upon arrival!  Alternatively, B&Bs can offer a more colonial and authentic experience of Boston. I found a great website at www.bnbboston.com  that consolidates many of the B&Bs through a central booking manager.  Be aware that most B&Bs in Boston require a minimum say of 3 nights.

If there’s one thing I know, it’s that Boston has some GREAT food for all budgets!

For lunch, we loved popping into Irish pubs. Boston Magazine just named Phoenix Landing the best Irish Pub in Boston, actually located in Cambridge for 2014. “The Phoenix Landing is like four bars in one: You can go for a quiet afternoon pint alone, brunch with the family, crack-of-dawn soccer broadcasts, or nighttime dancing to some of the best DJ talent around.”

A business colleague took my boss and I to Cuchi Cuchi located in Cambridge. Employees of the restaurant dress up in saloon style attire, which they call “Old World Beauty,” adding to the unique atmosphere. The small international dishes (which are delicious!) are meant to be shared, but don’t call them tapas which are native to Spain. Cuchi Cuchi “globe trots!”

We had many recommendations to go to the Union Oyster House in Boston and just off the Freedom Trail. But get their early as this popular eatery fills up fast! Oh, and try the Clam Chowdah’!

My In-laws raved about Doyle’s Cafe for the food and fun experience. For those who wish to visit and tour the Samuel Adams Brewery (who doesn’t?), a lively trolley bus will take you between Doyle’s  Café and the Brewery.

The Red House Restaurant was a nice find for us. It is located just off Harvard Square and is bustling with students on a weekend. The restaurant offers a vast wine list and many savory options on the menu. The restaurant is quaint, dimly lit for ambiance and isn’t too loud.

On our first trip to Boston, we discovered B&G Oysters. If you do not make reservations, expect to wait at least an hour. If you’re willing to wait, pop across the street over on Tremont to The Butcher Shop for some wine and cheese as an appetizer.  We loved B&G so much that we had to introduce it to my parents when they came in town to visit.  All left with bellies full and smiles on our faces!

There are so many historical sites in Boston to visit that the Freedom Trail was created to help navigate visitors around the city in the most efficient way possible.  Free tours are offered of the Freedom Trail by the National Parks Center at Faneuil Hall.  Check here for important opening/closing times of various site visits.

Sites along the Freedom Trail

The freedom trail foundation is your best source of information.  Included stops on the Freedom Trail route areas follow:

Bunker Hill Monument – At 2 pm there is a musket demonstration

Map of the Freedom Trail

As previously mentioned, the Samuel Adams Brewery offers tours with advanced reservations (walk-ons are welcome if space permits). Tours are offered every 45 minutes and last about 1 hour.

Boston is known for its vast number of higher education institutions. It is a treat to walk around the Harvard campus, especially in the Autumn season, and take in its grandeur presence. Free self-guided tours for Harvard can be found in the itunes app store. You can also discover the FIRST computer ever made in Harvard’s library. Spoiler Alert: it’s bigger than your iphone! 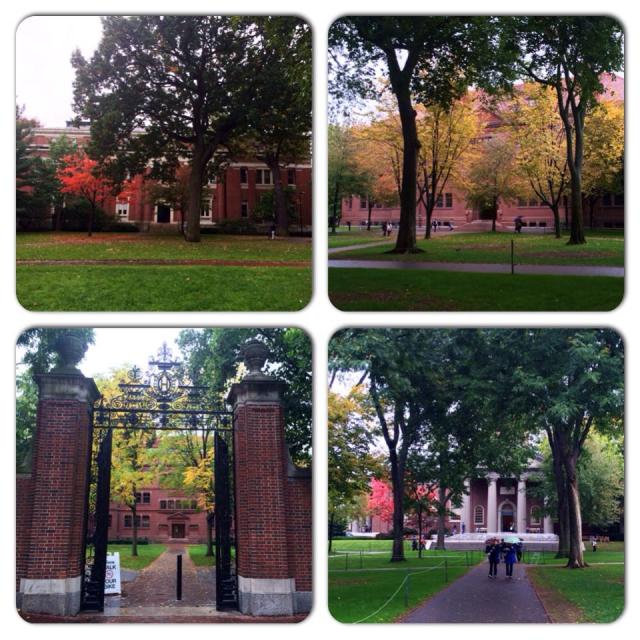 If you make it to Boston in baseball season, don’t miss a Boston Red Sox game at Fenway park. The stadium is as intimate as Wrigley but if you’re there to support the visiting team, beware that the fans love to heckle! We were there for a Red Sox playoff game in 2013, the year they ultimately won the championship so the fans were really excited and it made for a really fun experience.

Another attraction I haven’t visited but is worth noting here…the JFK Presidential Museum. The museum begins with a short film followed by exploring the various exhibits including the Kennedy-Nixon Debate, the Cuban Missile Crisis, the space program, campaign paraphernalia and displays of the Kennedy family.

Also worth noting as it’s the #1 attraction on Trip Advisor for Boston is the Boston Symphony Orchestra. The symphony would be a great activity for a rainy or cold day. If you’re not committed to staying for a concert, take the free tour of Symphony Hall.  I have to say, one of my favorite things to visit in European cities are the opera houses. The opulence and ornate architecture is so fascinating in these majestic halls. Tours begin at the Massachusetts Avenue lobby entrance. Free walk-up tours are available on select Wednesdays at 4 pm and Saturdays at 2 pm.

Another rainy or cold day activity would be to visit the Museum of Fine Arts which happens to be one of the largest museums in the United States with more than 450,000 pieces of art. There is an extensive American collection and European collection which includes Manet, Degas, Cezanne, Renoir, Van Gogh, Monet and Matisse.

Boston as a city exudes history and intellect. Its beauty is unmistakable, especially in the autumn season with the bright yellow and orange leaves. Its size is manageable and not at all intimidating. It is safe to say that we are impressed with this city!