So what better place to visit over the July 4th weekend than Washington D.C.?! My husband and I loaded up the car and ventured down to D.C. for what was going to be an awesome weekend!

We found a Groupon deal that landed us in the Washington Court Hotel. It was a great location and clean with a large lobby area. There was even a game room for pool and authentic shuffle board for any down-time (there was none of that)!  Our friends also visiting D.C. stayed at The Liason at Capitol Hill just next door.  The only complaint we heard from them was that the elevators were slow and full but they thought it was a fun modern “boutique” hotel.

So here’s the lay of the land (double click to enlarge):

Anyone visiting over the July 4th weekend should check out the activities in the area as there were many festivals going on. We opted for the Independence Day Parade and the Fireworks show at the National Mall. It appeared that people camped out several hours before the 9:15pm show so know-before-you go. However, we showed up around 8:45 and the 4 of us were able to grab a small space of grass up front and center. Maybe we’re lucky?! The show only lasted 15 minutes which was a slight disappointment but there were several other firework shows in the vicinity that are viable options as well. However, the Washington Monument serving as the backdrop on the National Mall would be hard to give up! In years past, we watched the show from Arlington Cemetery which was also swarming with herds of people.

One of my favorite things we did was take a tour of the White House. In order to do so, you must contact your current state’s congressman who will require you to fill out a form, including your social security number for a background check. It’s recommended to do this several months in advance. About two weeks prior to your requested date/time, you will get a notification from your congressman indicating if you have been selected to take the tour and what time you were allocated. If you plan to do this, make sure the rest of your D.C. stay is flexible because the White House is NOT.  Because each state’s representatives have varying requirements to visit the White House, you can go here for more information.  Regarding the tour, it is a self-guided tour through about six rooms. Each room has secret service men who are able to provide facts and interesting tid-bits on the room. Take advantage of them, they are required to undergo testing in order to be able to protect their designated rooms and can provide some great insight! 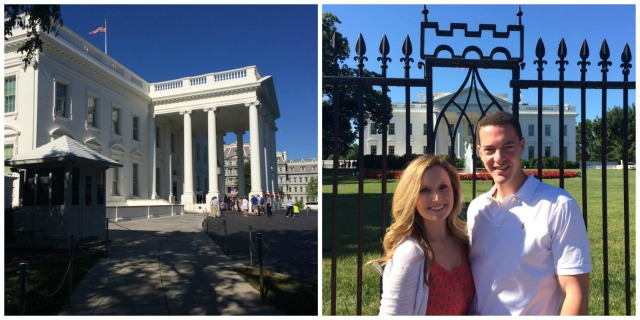 Tour of the White House

Prior to our arrival in D.C. we had been told that the metro system was going to be very crowded. We also learned from experience that you can cab nearly anywhere for less than $10. We found this to be a good option. We also really enjoyed the Bike Share. For only $8 a day you can use the little red bikes found all throughout the city. The only catch is that you must check the bike in every 30 minutes. This is plenty of time to get you from destination to destination. If you go over your allotted time, you are charged an additional $2 for the following 30 minutes and $6 if you are 90 minutes late. Not a bad gig! They also have an app that you can download that tells you where the bike stations are and how many bikes are at the various locations.

We especially enjoyed this feature after dinner later at night when there were far fewer cars and people along the street and at the monuments. The monuments are a sight to see near and far as they are lit up spectacularly at night.

For about 1 hour by bike, we checked out the following:

We found this to be a very efficient way to get around the city!

Sightseeing at night by bike

After our time in Europe, we have found ourselves more interested in WWII which led the US Holocaust Memorial Museum to be near the top of our list to visit while in D.C as this is the largest Holocaust museum in the US.  After having visited several in Europe, including Auschwitz, we found the US version to be very well done and included some of the exhibits/demonstrations found at other museums. We could have spent all day in this museum; however, my recommendation would be to schedule your tour when the museum opens to avoid the crowds. The museum, though well done, is not meant for a lot of people to be shuffled through and that is exactly what happened to us at 2pm in the afternoon….moral of the story: go early!

There are so many museums to visit in Washington D.C. and unfortunately we just didn’t have time to visit them all. We will have to save the National Archives Museum, Library of Congress, Smithsonian, Arlington National Cemetery, Bureau of Engraving (aka: Money Factory) and tour of the Capitol for next time.  We found it necessary to book tickets in advance at specified times in order to avoid lines wrapped around the building. Often you can drop in and pick up a scheduled tour later in the day but booking online would be much more efficient.

If visiting in baseball season, check out the Washington Nationals! This ballpark is quite modern with a very interesting feel to it. The top deck serves various types of foods including Mexican and Gelato. It also has a seated area with comfy patio furniture and a huge projector showing the game. We found this area to be swarming with young adults and thought how fun it would be to buy cheap seats and come up to the top deck to hang out and socialize.

We had many good meals in Washington D.C. and probably didn’t bike enough around the city to make up for it! Here are a list of places we ate at followed by some commentary on each:

Founding Farmers for Brunch: AMAZING. We loved this resto that was perfectly designed to the food type which was good southern eating! The price was right and we ate like kings and queens! I splurged (on calories) for the Chicken and Waffles. Others in our group ordered the eggs benedict, waffles with strawberries, and the Founding Farmers Breakfast and none were disappointed. We agreed that this might have been our best meal all weekend!

Another awesome brunch came from Georgia Browns. Everyone pays a set price for a “3 course meal.” I put this in quotes because it’s nearly laughable to describe the concept in this way. The first course is an open buffet filled with an omelet station, waffles, salads, cut meats, biscuits and gravy and my favorite, GRITS! This was enough food to satisfy the biggest of appetites. Then there’s the second course which you pick from a menu of about 8 items which consists of a full meal….yes, A.FULL.MEAL! Before taking our order, our waiter asked if it would be for “here or to-go?” (WHAT?! THAT’S AN OPTION??) This made for a new strategy: eat all you want during the first course, and take the second to-go for dinner….THEN you get a 3rd course which was a dessert bar consisting of a chocolate fountain, various fruits, brownies, cookies, rice Krispy treats, and piping hot peach cobbler! We needed to be rolled out but our $40 brunch cost fed us the entire day…. Win!

Zaytinya: This tapas style Mediterranean restaurant served great food, including a tasting menu. I went into the experience with the expectation that it would be a more quaint/quiet restaurant…it was actually large and quite open (read loud). I didn’t consider this necessarily bad. Fortunately, we sat on the upper level that had fewer tables. A table overlooking the lower level would have been ideal. As there were 4 of us, we opted out of the tasting menu and ordered about 12 plates a la carte to share. We were pleasantly surprised by all the dishes. This resto also came recommended by our local friends.

Bistro Bis: This French restaurant had a great menu and we all enjoyed what we ordered. This is one of those places where you know you’ll get an great meal and there will be no surprises one way or the other. Our friend said that the appetizer scallops were the best he had ever had.

We also had dinner one evening at Le Diplomate as it is part of the Starr Restaurants (refer to my Philly post on Talula’s Garden). This place books up weeks in advance so a reservation is highly recommended though they do hold tables for walk-ins…just be prepared for a 1 hour wait.  This place was bumpin’ with people…clearly a popular hangout. Vibe was great, food was mediocre. I had the duck which came on the bone (I should have asked) and our friends ordered the chicken which they felt was a bit plain. We did, however, enjoy the escargot! It’s my understanding that their daily specials are very popular and sell out within hours so keep that into consideration if you opt for this resto.

For a pre/post dinner drink, head over across the street to Black Jack. I loved the vibe of this bar and they had lots of creative cocktails on the menu and a unique beer list. I particularly liked the Elderflower Monk cocktail.

Matchbox served as a great lunch spot for pizza and salads just in Chinatown. They had various other items on the menu. This restaurant came independently recommended from two of our local friends!

Other recommendeations that came to us from our local friends: